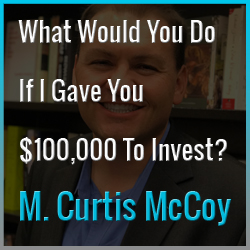 Earlier this week I asked the question. “If I gave you $100,000 but you had to invest it, what would you do with the money?”

What would you do, if money was the only thing standing between you and success? If you knew the money was yours as long as you created a strong enough “WHY”, what could stop you?

Some of the most successful entrepreneurs in history started out desperate and broke. I personally launched the company that later acquired BestCellular.com while fighting brain cancer and given no chance of survival. Now, Best Cellular connects customers all over the United States!