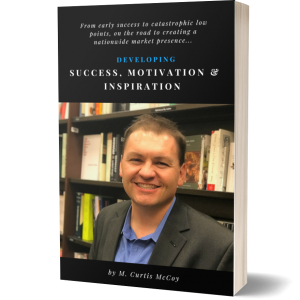 People often describe me as a CEO, a leader, and hopefully soon, a best-selling author. Friends might say that I am a thrill seeker. Although all of this is true, I would like to introduce you to the version of myself that the general public doesn’t often see.

My name is Matthew Curtis McCoy, but I go by Curtis. I’m a survivor, a leader, and an author. I’ve been an inventor and an entrepreneur since grade school, and I’m constantly looking forward to the next big thing. Even though I have a lot of personal drive, I’ve also had my share of personal difficulties. I’d like to share my story with you!

Creating Success In Spite Of Struggles

I’ve had Type 1 diabetes since I was 27 months old. Frequent grand mal seizures became a normal experience for me from a young age. Even today, I still have to constantly monitor my blood sugars and take frequent medication.

In spite of this constant struggle, I was able to build a prosperous life. By the time I was 25 years old, I was running numerous companies in Denver including a cosmetic medical LASER franchise, a company distributing pharmaceutical grade injectable research peptides, a health and fitness forum with tens of thousands of members online, and a Christian clothing company. I also owned a nutritional supplement company that sponsored MMA fights, bodybuilding shows, and other events. Through all of it, I had the chance to connect with all sorts of interesting people. I was achieving my dreams and making good money.

Everything changed on July 24th, 2009. I was diagnosed with a malignant glioblastoma (brain tumor).

Although my memory began deteriorating and I was experiencing seizures daily, I continued trying to run my businesses. Then I woke up one morning, six months later, with the right side of my body completely paralyzed. An ambulance took me to Swedish Medical Center in Denver and after performing CT Scans, MRIs, and a series of other tests, the doctors told my parents I only had a few months to live. The main oncologist put his hand on my mom’s shoulder and told her to, “make some good memories while I was still here.” He told her, “I wish I had better news” as he walked out of the hospital room.

The daily seizures made it impossible to live alone. My parents wanted to help with the seizures and medication schedule so I moved from my apartment in Denver to live with them in Crawford, Colorado. They lived in an old one-bedroom cabin outside of town, 35 miles from the nearest stop light. I slept on an inflatable mattress that went flat each night. I lost the ability to drive, my friends in Denver, and the companies I’d worked so hard to build. My social life, my businesses, and the ability to ride my new motorcycle were all gone in the blink of an eye. Life looked like it was coming to an end.

Since the doctors in America gave me no hope of survival, my parents and I began making trips to Tijuana, Mexico to try out some alternative cancer treatments. Friends, family, and American doctors all warned us that the treatments in Mexico are not approved by the American Medical Association. They told us how dangerous Tijuana was, (although none of them had actually been there before). They warned that the treatments were not regulated and they told my family that I could die if we let them treat me in another country.

I had already been given a 0% chance of survival if I pursued traditional cancer treatment in America. The oncology team in Denver wanted me to let them cut, burn, and poison my brain in hopes of killing the tumor, with little to no possibility of success. We decided I had nothing to lose, so we pursued treatment in Mexico.

In an effort to get my mind off the brain cancer and losing everything I thought was important, my mom encouraged me to start another business in Hotchkiss. I began advertising locally and fixing broken iPhone screens. Soon my first phone store was drowning in customers from surrounding areas.

Over the next few years, that first little phone store in Hotchkiss grew to become a nationwide cellphone company called Best Cellular. We launched Best Cellular using the same towers as the largest carriers in America with the goal of creating American jobs while providing cheaper, more flexible phone plans.

With ongoing monitoring and treatment, I’m still alive and pursuing my dreams, years after receiving a death sentence. Today, the phone company I started ships phones, SIM Cards, and accessories to customers all over the United States.

As Best Cellular began to expand nationwide and our social influence grew, I was able to surround myself with incredibly successful people once again. I was inspired by their insights on success and realized that others could be as well.

Sharing My Story To Encourage Others

Success, Motivation & Inspiration will be available online and in major bookstores nationwide this coming year…

From early success to catastrophic low points, and on the road to creating a nationwide market presence in multiple arenas, I’ve experienced my share of highs and lows. Faith, family, and friends are the bridges that supported and helped me make it to the next mountaintop.

I’d like to leave you with this: Don’t ever give up. Just because a doctor says you’re going to die, that doesn’t mean God agrees. Anything is possible for those who decide to reach out and grab it!

In my upcoming book, you will experience a combination of interviews with entrepreneurs, overcomers and incredible people who have succeeded despite the odds being stacked against them. I’ve also included a series of life lessons that I’ve learned as I created successful companies while fighting diabetes and a malignant brain tumor. I hope you love the upcoming book!

Learn to Send the Right Message